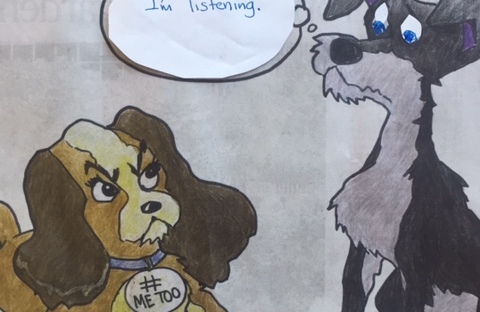 When I was in my mid-twenties I was a junior member of the editorial team in a television newsroom. I had a lot to learn about television news, so I tended to just listen, and when I did contribute, I quickly learned that my input was offtrack. It turned out I wasn’t really very good at television news.

So I clearly remember the morning when my input actually had an effect, and influenced the decision making.

I think it would have been 1994 or 1995, and that morning the editorial team were discussing the Miss New Zealand pageant taking place that night, and the likelihood of being able to do a story that juxtaposed the contestants, with angry feminist protestors. At some point, one of the other editors thought to ask me (the only woman in the room) what I thought. I thought a lot of things, which I was struggling to make sense of, including incredulity that in 1994 a beauty pageant might be considered news (it’s not 1954, for goodness’ sake), and surprise that these grown up men were so excited by the idea of the pageant. But what I said was – I really don’t think anyone cares any more.

And with that, the story was dropped. If I’d argued that we shouldn’t run the story because their angle on it was so deeply masculine and utterly flawed, they wouldn’t have understood, perhaps they even would have thought “aha, the feminists are angry!” and the story would have proceeded.

I was learning. About television, about news, and about working with men.

Television[1] doesn’t really like complexity: if you want to sell or kill a story, make your argument super simple. News[2] loves controversy. If you suck the controversy out of a thing, it loses much of its news interest. And men[3] don’t perceive the extent to which their gender dominates the agenda in nearly all spheres of our lives.

In the early years of my career I came to understand that women are – in a metaphorical sense – bilingual, but men are not. Women come into adulthood largely fluent in understanding our own female or feminine experiences, our own gender, our own reality, and able to articulate that, and speak to each other freely in that language. We are also fluent in masculine. We’re fluent in masculine because the male gaze dominates (it did then and it still does) the cultural, the social, the media and the political landscape.

As we get older, I think it’s possible that women lose some of their fluency in their native tongue, so dominant is the masculine language. Some women[4] – particularly if they are living and working in strongly masculine contexts like business and parliament – may even forget their native tongue altogether.

The bit that I am inventing is this metaphor of language. Equating only being aware of the male gaze, to being monolingual; and equating the experience as a woman of being able to – having to – switch between two modes of being, to being bilingual.

It’s not a perfect metaphor[5], but I think it holds.

I remember that moment of consciousness, one day when I was in my early twenties, working at Parliament, in my first job out of university. One day I tried to say something that made sense to me, and the men I was working with dismissed it out of hand. And for some reason I understood that the context was gendered. That I’d provided a feminine perspective, and they had falied to comprehend it. At the time, I thought “hang on, I have to speak their language all the time – but they never have to speak mine?” And I remember the feeling of injustice, and alienation and isolation that came with it.

This feeling has resurfaced during the #MeToo discussion. I’ve had conversations with male friends, that have shown me that many men just can’t comprehend what they are hearing. It feels to them as though a different language is being spoken. The men I’ve been lucky enough to talk to about this, are genuinely trying to understand. They can see there is something they have missed that they can still learn about, and they want to.

Other men, whose opinions I’ve been unfortunate enough to have read in the media or online, have taken a different approach. They have heard the women talking about their experience of sexual harrassment and abuse, and have determined that because it makes no sense to them, it must be nonsense. To them, we are not speaking another language that they don’t comprehend, we are speaking gibberish.

For me, the power of the #MeToo and the gender equal movements is that the female gaze, and the feminine language, are finally being seen and heard in the maintstream – certainly not yet on an equal footing with the male gaze and language, but at least more than before.

At times I have nearly wept to hear my native language being spoken openly. It has made me realise that what I have experienced in my life is common, that I am not alone, or unusual, or isolated.

I’m afraid for the backlash that will certainly come, and I hope it doesn’t set us back further. There is so much opportunity in this time, to make life for both genders more balanced, and richer. To allow more of us to be bilingual.

If I had one wish for the people who are hearing the #MeToo discourse and finding it difficult to take in, it is that they could find the patience and the will to just listen, and reflect, and look about themselves.

Soon perhaps the words will begin to take on meaning, which is the first step to understanding.

[5] In creating a metaphorical link to language, and language suppression, I need to acknowledge the very real language and cultural suppression perpetuated by colonists in New Zealand against Maori. It’s not my intention to assign any equivalence between that documented historical abuse and my own early musings about language as a metaphorical concept in the gender context.

5 thoughts on “The female gaze; the mother tongue”